A select group of authors who have won or been finalists for the AAAS/Subaru SB&F Prize for Excellence in Science Books have been invited to write or record an introduction to one of their books. We have suggested a few guidelines, but the format and content have been chosen by each author and will be appropriate for their book's intended audience. Science NetLinks will include related classroom resources appropriate for students and educators at the end of each Spotlight on Science Writers post. You can read all the posts in this series here.

April Pulley Sayre on Stars Beneath Your Bed: The Surprising Story of Dust:

My work is about wonder and scientific inquiry. I love when kids feel connected to the world: to nature, trees, leaves, rocks, stars. Stars Beneath Your Bed: The Surprising Story of Dust is about what I call a “chewy idea,” the kind of idea that you have to chew over to understand, the kind of idea that makes you feel as if your brain has to expand, just a bit, to encompass it. That idea is that the dust around us contains everything from ancient pollen grains to ocean salt to butterfly wings. Our skin actually becomes part of this dust. The dust rises into the air and helps create the colors of the sunset.

The original version of my book, Stars Beneath Your Bed: The Surprising Story of Dust was a scientific exploration of what is in dust, accompanied by photo images of butterfly wings, ancient pollen grains, and human skin. To create that book, I consulted with one of the world’s major dust experts. Where did he work? S.C. Johnson Wax, which makes products to fight dust!

Back then, the book was a cool idea, but fairly standard as science texts go. That book was rejected over and over, year after year. Then, one morning in a dorm at Vermont College, while studying for my M.F.A., I looked out at the sunrise and the entire book structure reorganized in my mind. New language for the book poured out of me in only a half an hour. I walked downstairs, overjoyed, and spoke to a colleague, Eden Edwards, and I told her what had happened to this book, how it had been transformed. That feeling, of sudden connection, inspiration, and awareness is what drives both creative writing and scientific exploration. I hope that readers will feel a bit of that when they read the book.

Of course, when you write a book, you never know if readers will feel that same mental joy and heart lift when they read it. When the book received recognition from AAAS/Subaru/SB&F, I was thrilled! One of the satisfying things about this book is how educators have embraced it. Many educators have allowed me to share their activities on my website. Apparently, the book fulfills lots of science standards. (It also helps if you’re dusting at home. It helped me realize that you can never really defeat dust: you can only nudge it along in its journey!)

Recently, Stars Beneath Your Bed: The Surprising Story of Dust took on another layer of meaning for me. This summer (2015) I was in San Francisco at the American Library Association National Conference, speaking about my book Raindrops Roll. There I had a chance to see Donald Crews honored for his lifetime of work. He spoke about his creative life with his late wife, Ann Jonas. Stars Beneath Your Bed: The Surprising Story of Dust was one of her final works. On the conference floor, for the first time ever, I met Donald and also Nina Crews, their daughter. (She’s a well-known children’s book author/photographer.) Donald told me how Ann had enjoyed working on our book. This encounter was yet another meaningful connection brought about by this book, about connections. Life, books, and science are wonderful this way. 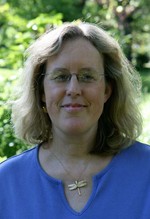 April Pulley Sayre is an award-winning children’s book author of more than 55 natural history books for children and adults. Her read-aloud nonfiction books, known for their lyricism and scientific precision, have been translated into French, Dutch, Japanese, and Korean. She is best known for pioneering literary ways to immerse young readers in natural events via creative storytelling and unusual perspectives.

Sayre has followed lemurs in Madagascar, pursued army ants in Panama, and eaten piranha in the Peruvian Amazon. She and her husband, native plants expert Jeff Sayre, love science and adventure. Sayre holds a B.A. in biology from Duke University and an M.F.A. in Creative Writing from Vermont College.

Along with illustrator Ann Jonas, she won the 2006 AAAS/Subaru SB&F Prize for Excellence in Science Books in the Children's Science Picture Book category for Stars Beneath Your Bed: The Surprising Story of Dust.